by Jacob Clifton
Prev NEXT
9 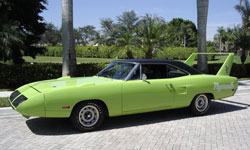 The Plymouth Superbird was rebuilt in a unique design that met the requirements of NASCAR at the time.
Photo courtesy of CarGurus.com

This hardtop regularly makes best-of lists, edging out other Plymouth choices, although it was originally based on the Road Runner. Its distinctive redesign was built to meet the particular requirements of that muscle-car mecca, NASCAR: The highest expression of muscle car power back in the day, and something every driver -- whether by fantasy or aspiration -- knew signified the greatest accomplishments of both engineering and driving skill.

Equipped with a Magnum 440 cubic V-8 engine, the standard horsepower was 375. The Superbird shipped with two upgrade choices: either a "six-pack" (meaning three two-barrel carbs instead of the stock 4-barrel) or the 425-horsepower Hemi V-8, which remains the more valuable configuration.

While many of those Superbirds probably didn't get too close to living out their NASCAR dreams, they inspired a generation. For those who liked the look of the car's odd -- but trendsetting -- body better than the more utilitarian Road Runner, it was a question of aesthetics. But the Superbird is still bringing dreams alive.