by Jacob Clifton
Prev NEXT
7 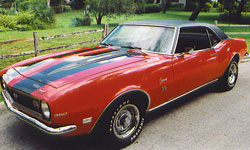 This '68 Camaro is still the dream vehicle of many classic muscle car enthusiasts.
Photo courtesy of CarGurus.com

In 1967, the favored version of the Camaro was the Z-28, although options packages were pretty varied. With a 4.9-liter and a four-speed manual gearbox, the car was made for racing; its brakes were in the front, which made handling tricky for the newcomer but precise for more practiced drivers. The base package, which raced a quarter-mile in 14.8 seconds, included a small-block V-8 with 290 horses, Muncie four-on-the-floor transmission, positraction and power steering. The Z-28 was built for road racing, and it's still beloved for both handling and its well-known design.