by Jacob Clifton
Prev NEXT
5 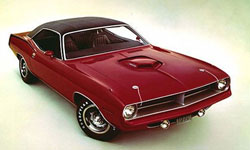 In rare cases, well-maintained Plymouth Barracudas have sold for as much as $2 million.
Photo courtesy of CarGurus.com

Along with the distinction of being the biggest earner over the past 10 years' market (an already-high value of $49,000 has jumped for the best-kept cars to more than $2 million in some cases), the Barracuda has a rich and long history [source: CNNMoney.com]. Though it launched in 1964, it took more than six years to become a hit. In 1970, Plymouth introduced a 7.2-liter engine capable of 390 horsepower, which brought the Barracuda into the mainstream of the muscle car community.

Another version included a 7-liter Hemi block capable of 425 horsepower, known like its less-powerful brothers for difficult handling no matter how many times they revamped the suspension. This "Hemi-Cuda" could hit 60 in 5.6 seconds and had a reputation for burning rubber without much effort at all. Due to the price tag and increased insurance premiums, only a few hundred were made. None had the same trim, color or transmissions, making each collectible in its own right, and it's said that only about a dozen convertibles had the Hemi setup.