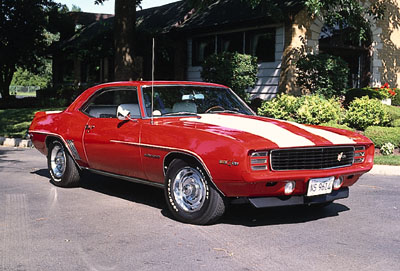 It wasn't the fastest muscle car, but with single-season styling and a unique combination of brake, engine, exhaust, and induction options, the 1969 Chevrolet Camaro Z28 was arguably the most desirable Z28 of all.

Adding $458 to the $2,726 base price of a Camaro coupe, RPO Z28 included the F41 handling suspension with E70X15 raised-letter tires on seven-inch wide rims, quicker steering, and twin rally stripes. Front disc brakes were standard on the 1969 Chevrolet Camaro Z28, and for the first time, four-wheel discs were offered. They cost $500 and just 206 sets were delivered, about half going to full race cars.

The solid-lifter 302-cid V-8 with an 850-cfm four-barrel carburetor was again exclusive to the Z28. Dynomometer tests at close to 400 horsepower made a joke of its 290-horsepower rating. Dealer-installed dual four-barrel carburetor options were offered even in '67, and for '69, $500 bought twin 600-cfm Holleys on a cross-ram manifold, though at no change to the 290-horsepower rating. Chambered exhaust pipes -- perhaps the least-restrictive exhausts Chevy ever offered -- also were available.

Yet another functional option unique to 1969 Chevrolet Camaro Z28s was the $79 cowl-induction hood. It had a valve that snapped open at 80-percent throttle to draw in cool air from the base of the windshield.

1969 Chevrolet Camaro Z28s again came only with a Hurst-shifted close-ratio four-speed; 3.73:1 gears were standard, with up to 4.10:1 gears available. Positraction was an option. Styling could be enhanced by the Rally Sport package, which gained transparent louvers for its hidden-headlamp covers.

Handling was razor-sharp, aided by power steering that was both quick and had road feel. Four-barrel 1969 Chevrolet Camaro Z28s could run the quarter mile in 14.8 seconds at 101 mph, but the small-block's shortage of low-end torque was multiplied with the dual-quads, which fed on sky-high revs. Even dropping the clutch at 4000 rpm produced stumble off the line.

Its road-racing roots were evident in a peaky engine that was ill-at-ease on the street, but the Z28 was one of the best-handling rides of the muscle car era.

The '69 Z28 was one of the hottest-looking rides of the classic muscle car era, and showed what Chevy stylists could do to express performance and excitement. For additional photos of '69 Z28s, and a special look back at a fascinating selection of vintage Camaro brochures, explore the next three pages in this article.

©2007 Doug Mitchel Like all Camaros for '69, the 1969 Chevrolet Camaro Z28 traded the soft  contours of the 1967 and '68 models for a fresh skin that featured sharper lines and horizontal brows over the wheels.

The 1969 Chevrolet Camaro Z28 was a classic small-blo­ck screamer and drew on its road-racing lineage for many of its styling cues. Unlike the muscle cars that focused on straight-line acceleration, the Z28 seemed to hug the road and employed aero addenda, such as front and rear spoilers, to enhance the effect.

Chevy generated lots of showroom excitment with its lavish model brochures. For a look back at some of the best performance-oriented Camaro literature of the muscle car age, check out the next two pages. 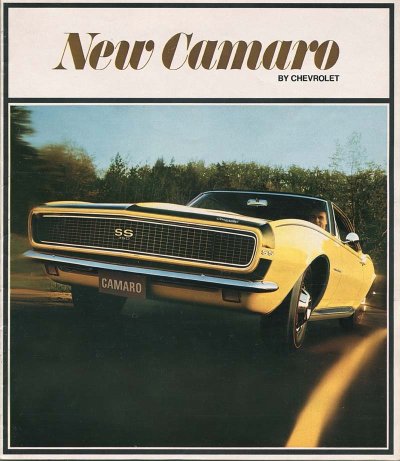 Chevy revealed the image it wished to project for its newest car by putting a Super Sport edtion on the cover of a brochure for the very first Camaro, the 1967 model.

Chevrolet introduced the Camaro for the 1967 model year and made high-performance central to the car's appeal from the very start. On this page is a selection of brochures touting the curvacious new pony car's wilder side.

For 1967, SS equipment added $210 to the $2,572 Camaro Sport Coupe or $2,809 convertible. It included the new 295-bhp 350-cid V-8. The hood vents were decorative, not functional.
To suggest a road-grabbing stance, all 1969 Camaros were "huggers." The SS on this brouchure cover combines the hidden-headlamp Rally Sport package with the optional ($42) body-color front bumper to fine effect.
Chevy wasn't shy about pitching the '69 SS Camaro's performance attitude in print or, through bright hood vents and bold body stripes, in the metal, either.

See more classic Camaro brochures on the next page. 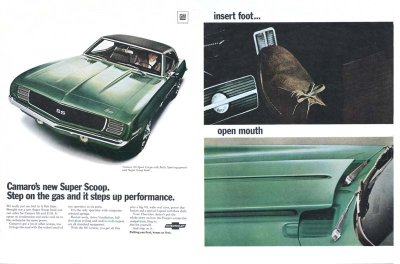 This spread for the 1969 Chevrolet Camaro SS highlights the optional Super Scoop,  a force-air induction hood that drew on the high-pressure area at the base of the  windshield. It funneled power-enhancing air to the high-performance V-8.

Chevy drew on GM's enormous marketing budget in the 1960s and '70s to produce some of the industry's slickest new-car ads and brochures. These period Camaro layouts are great examples of those high production values.

By the time this brochure for the 1972 Chevrolet Camaro SS was published, muscle cars were suffering at the hands of safety, environmental, insurance,  and gas-price forces. Still, there was a performance message to be told.
The 1972 Chevrolet Camaro Z28 wasn't imune from the anti-muscle car assault,  but with 255 bhp, fat tires, and a well-sorted suspension, it was among the  best-balanced American driving machines of the day.