Automotive high performance came out of hiding in 1960, signaling the dawn of the classic age of muscle cars. V-8s had been bulking up, so "big-blocks" were a must on and off the track. Chrysler Corporation had a fleet of V-8s with wedge-shaped combustion chambers with up to 413 cubic inch displacement and over 400 bhp via "Cross Ram Induction." Hemis were in limbo as expensive to build, but wedge-powered Chryslers, Plymouths, and Dodges were usually in the hunt among stockers and dragsters.

Ford took its sturdy FE-Series V-8 to 390 cid for 1961, then to 406. Chevrolet, meanwhile, turned its 348 into a brawny 409, soon immortalized by the singing Beach Boys. , having gone from staid to sassy in the late '50s, kept spinning out variations of its 389-cid V-8 and then issued a "Super Duty" 421 for favored drag racers. And all over , parts catalogs bulged anew with go-fast components.

Though neither was designed particularly for racing, "aero" styling like this proved crucial on NASCAR's new high-speed ovals, where a few extra mph could mean the difference between first and second place. And the fun had only just begun.

The American car landscape itself had expanded in 1960, when introduced small economy compacts to supplement traditional full-size "standard" models. Many buyers preferred something in between, however, so the midsize car was a logical next step.

Ford had a popular "Better Idea" with its new-for-'62 Fairlane and Mercury Meteor intermediates. Arriving with them was a lively, high-tech small-block V-8 (in 221- and 260-cid sizes) that would soon become a bona fide performance mill. Dodge and also offered intermediates for 1962, but unlike Ford and Chevrolet, dropped their big cars.

The result for Dodge and was a sales disaster but an exciting new kind of performance car: much trimmer and lighter, and available with big-car power. Quicker than you can say elapsed time, these smaller Dodges and Plymouths were the cars to beat in NHRA's new Super/Stock class.

They remained so in 1963, when the Dodge Ramcharger/Plymouth Super Stock wedges went to 426 cid, good for up to an advertised 425 bhp, and much more in the hands of expert tuners. Wedge 426s set eight NHRA records right out of the box, and Hot Rod clocked a scorching 12.69-second quarter-mile in a Super Stock Plymouth with automatic and a tight axle ratio.

Of course, rockets like this were rare on , but they added high-powered sales luster in showrooms and made a huge impression on the public. The classic age of muscle cars was at hand.

The next page dives into the classic period of muscle cars, as hot machines with big engines became the darlings of and changed 's automotive landscape. 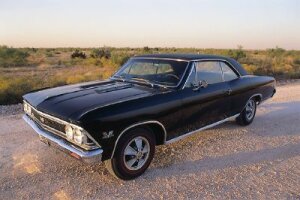