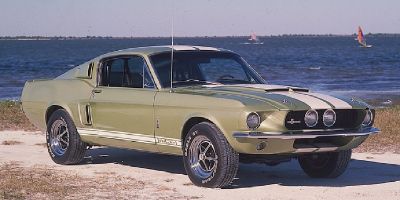 A blend of sports car and muscle car, the 1967 Shelby GT 500 satisfyed a maturing taste for high performance.

The GT 500 represented a departure for Ford factory tuner Carroll Shelby. To make a road-racing champ of the 1965-1966 Mustangs, Shelby had transformed them into thundering thoroughbreds ill-suited to everyday driving. By 1967, however, Shelby's audience was demanding more civility, and the original pony car was undergoing a revamp that finally gave it room for big-block power.

The 428 was otherwise reserved for bigger Fords, where it made 345 bhp. Shelby added the cast-aluminum medium-rise intake manifold from Ford's 427, twin 600-cfm Holley four-barrel carburetors, and other tweaks for a conservative rating of 355 bhp. During manufacture or through dealers, a handful of 1967 Shelby GT 500s were equipped with Ford's near race-ready 427-cid V-8.

The 1967 GT 500 had a four-speed manual transmission or a three-speed automatic, with axle ratios ranging from 3.50:1 to 4.11:1. Instead of true competition-grade underpinnings, the suspension was a fortified version of the Mustang GT's, with standard front disc brakes and E70X15 tires. Also gone were the two-seat cabins and standard racing harnesses of the original GT 350.

Always looking to improve performance, Shelby outfitted the GT 500s with fiberglass body pieces, including an elongated nose, a hood with functional scoops, and four body side intakes. The fiberglass tail had a molded spoiler and sequential turn-signal lamps borrowed from the Mercury Cougar. High-beam headlights were mounted in the center of the grille (some were moved to the sides to meet state laws). Twin "Le Mans" stripes were dealer-applied options for any 1967 Shelby GT 500.

If Shelby Mustangs were now less race car and more grand touring machine, that was fine with buyers, who took an immediate liking to Shelby's latest. The 1967 Shelby GT 500 cost just $200 more than the GT 350 and handily outsold its small-block companion by 875 units.