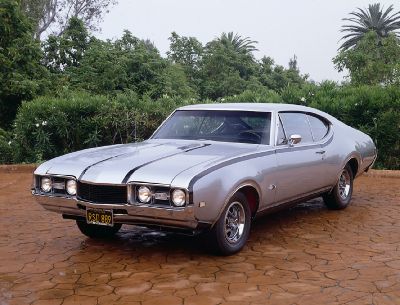 ©2007 Publications International, Ltd. Although George Hurst had done a lot of customizing work for drag racers, the 1968 Hurst/Olds was the first production muscle car to carry his name. See more muscle car pictures.

The Hurst part of the name referred to George Hurst, whose promotional fervor was luckily matched by the quality of his work. By the mid '60s, the former Philadelphia repair-shop owner's name was on some of drag racing's wildest exhibition cars, from the wheelstanding Hemi Under Glass to the tire-frying twin-engine Hurst Hairy Olds. And then there was Linda Vaughn, Miss Hurst Golden Shifter.

But for every stunt, there was a good product, like great transmission linkages or Hurst's most-important invention, the Jaws of Life rescue tool. It was conservative Oldsmobile, however, that first put the ballyhooed Hurst name on a production car.

The division's 4-4-2 entered '68 with curvaceous new styling courtesy of GM's intermediate-car revamp. Its 400-cid V-8 had 350 bhp -- 360 with the new Force Air option, a factory-installed induction system that inhaled through scoops beneath the front bumper. The W-30 option returned as a blueprinted 360-bhp mill backed by a beefed-up drivetrain and cost $263.

©2007 Publications International, Ltd. The 1968 Hurst/Olds turned the muscle car formula up a notch, employing the Old's Toronado's beefy 455-cid V-8 and the 4-4-2's Force Air System of ducting tubes and under-bumper inlets. It was rated at 390 bhp.

Hurst engineer Jack "Doc" Watson had built his boss a custom '68 4-4-2. The enterprising Hurst sold Olds on the publicity value of building a limited run of similar cars for sale through key Olds dealers. Whether the Cutlass S coupes Olds shipped to an outside assembly site were already equipped with the special 390-bhp 455-cid Toronado V-8 is under debate, but all the cars did get Force Air systems and Turbo Hydra-matics with a Hurst Dual-Gate shifter.

The suspension used the best factory components, so handling was on a par with the lauded 4-4-2's. The 455 V-8 was no handicap; it actually weighed 12 pounds less than the 400. All cars were painted Toronado "Peruvian Silver" with black accent stripes and rear-deck panel.

Outstanding power, fuss-free performance, full warranty, and exclusivity came at $1,161 over the sticker of a regular 4-4-2. Dealers took 3,000 orders for the car, far more than could be filled. The hype was real, and the '68 Hurst/Olds marked the start of a great muscle-car friendship.