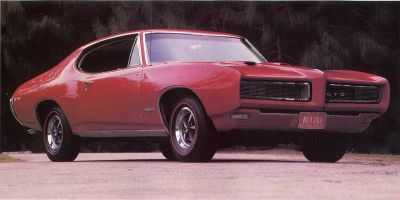 ©2007 Publications International, Ltd. The bumper on the 1968 Pontiac GTO was color-keyed to match the car, and hidden headlamps were a popular option. See more muscle car pictures.

When GM redesigned its intermediates for 1968, no division had a tougher muscle car act to follow than Pontiac. But talent rose to the challenge, and the 1968 Pontiac GTO emerged as a brilliant blend of beauty and brawn. It sustained the styling leadership of the 1966-67 series, and its performance remained competitive against ever-tougher rivals. Best of all, its aura was intact.

"In image, performance and class, the 'Tiger' is the car to equal," said Motor Trend in its survey of Detroit's '68 muscle armada. "Face it," said impressed Hot Rod editors after their first drive in the new Goat, "this is Pontiac's era."

Gone was the pillared coupe, leaving a two-door GTO hardtop and convertible, again with the best dash layout in supercar land. Curb weights were up about 75 pounds over '67, but a wheelbase shortened from 115 inches to a nimbler 112, another year of suspension tuning, and standard G77x14 tires improved handling enough to rival that of the best GM intermediate, the Oldsmobile 4-4-2.

Nothing rivaled the GTO's new energy-absorbing Endura bumper, which was molded and color-keyed to form the car's clean new nose. Hidden headlamps also were new and were so popular that most people didn't realize they were options.

A 400-cid four-barrel V-8 remained standard. The base version gained 15 bhp, to 350, while the HO and Ram Air editions climbed to 360 bhp. Midyear, Pontiac replaced the original Ram Air engine with the Ram Air II. Improvements included new cylinder heads, forged pistons, and lighter valves. Compression was unchanged, but output rose to 366 bhp. The Ram Air induction hardware was again shipped in the trunk for installation by the dealer. All engines were available with Hurst-shifted stick or automatic, though Ram Air cars came only with 4.33:1 gears and without air conditioning.

©2007 Publications International, Ltd. Despite some rough riding, the 1968 Pontiac GTO was popular with critics and buyers alike.

The steering transmitted too much road shock and had too little feel, and some sheetmetal wasn't the stoutest. But in the increasingly treacherous muscle jungle, the new GTO remained one of the big cats.