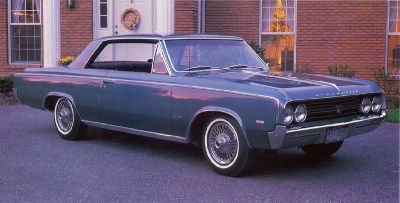 ©2007 Publications International, Ltd. Olds could claim the first "muscle car" with the 1949 Rocket 88, but it didn't return to the formula until mid 1964 with an option for the F-85 Cutlass series, called the 4-4-2 [above]. See more muscle car pictures.

In 1964, Oldsmobile needed an answer to the Pontiac GTO, and it came in the form of the Cutlass 4-4-2. A case can be made that the very first muscle car was the 1949 Oldsmobile Rocket 88, created when Olds shoehorned its 135-bhp big-car V-8 into a midsize model. When Pontiac rejuvenated the concept with its 1964 Tempest GTO, Olds was compelled to respond.

It took until midyear, at which time Olds extended its Police Apprehender Pursuit package to its new intermediate-sized F-85/Cutlass series, which shared the Tempest /LeMans chassis.

The package used the top engine available in these Oldsmobiles, a 290-bhp 330-cid V-8, then added a high-lift cam, dual-snorkel air cleaner, and some other minor tweaks to come up with 310 bhp. The engine's four-barrel carb, in combination with the package's Chevy-built Muncie four-speed manual and the car's dual exhausts, gave the new option its name, 4-4-2.

Offered on any body style except the station wagon, the 4-4-2 package added $285 to an F-85 or $136 to the uplevel Cutlass. It included a heavy-duty suspension with anti-roll bars front and rear, plus "tiger paw" tires. Balanced manners were a goal from the start and some road testers called this new Oldsmobile the best-handling midsize car in the GM stable.

©2007 Publications International, Ltd. The car was no street eliminator, but a lightweight 330-cid V-8 and a well-tuned suspension made the 4-4-2 the best-handling American sedan of '64.

But where Pontiac successfully pitched its GTO to the youth market as a factory hot rod, Olds was more tentative in promoting its new muscle car; one of the few advertisements pictured a couple of cops in a four-door F-85 sedan that didn't even wear the tri-color 4-4-2 badge. Performance buffs just weren't used to looking at Olds, and only 2,999 4-4-2s were sold this first season. Pontiac, by contrast, moved more than 32,000 GTOs in '64.