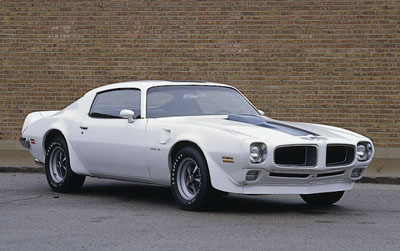 With the introduction of the second-generation Firebird, the 1970 Pontiac Trans Am came into its own as a bare-knuckles brawler. Functional spoilers and vents abounded, while super-tough underpinnings and quickened steering gave it corner-hungry handling. See more muscle car pictures.

Firebird and Camaro grew more European in nature with their second-generation redesign, but the scooped and spoilered 1970 Pontiac Firebird Trans Am was pure American muscle car, and more immodest than ever.

The 1970 Pontiac Trans Am's standard engine, the 345-horsepower Ram Air 400-cid V-8, furnished low-14-second elapsed times at the dragstrip. That apparently satisfied most buyers, because just 88 of the 3,196 Pontiac Trans Ams built that year got the optional Ram Air IV. That one added bigger ports, better heads, swirl-polished valves, and an aluminum intake manifold for 370 horsepower, 25 more than in '69. Rarer still was the Ram Air V, an over-the-counter, special-order piece that counted among its tricks solid lifters and tunnel-port heads for as much as 500 horsepower.

All these engines breathed through a new rear-facing shaker scoop designed to capture cool ambient air flowing over the hood. A four-speed transmission with Hurst shifter was standard; the Turbo Hydra-matic automatic was optional. Both came with 3.55:1 gears, and a 3.73:1 was available with the four-speed.

The 1970 Pontiac Trans Am wore the same impact-absorbing snout as other Firebirds, but Pontiac said its unique front air dam and fender air extractors created 50 pounds of downforce on the nose at expressway speeds. It claimed equal downforce to the tail from a big decklid lip and small spoilers in front of the rear wheels. Inside, complete instrumentation was standard and included a tachometer turned on its side to redline at 12 o'clock, just like in a real race car.

Critics were impressed. Even with 57 percent of the weight on the front wheels, Sport Car Graphic said, "Overall handling feel -- for a production car -- was as near to a front engine race car as we have ever driven." And Car and Driver called the 1970 Pontiac Trans Am "a hard muscled, lightning-flexed commando of a car, the likes of which doesn't exist anywhere in the world, even for twice the price."

The 1970 Pontiac Firebird Trans Am