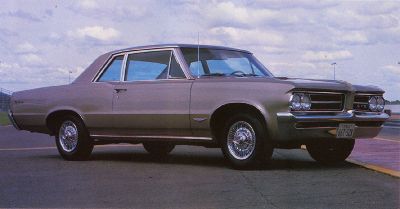 The Big Bang in the evolution of modern muscle cars is the 1964 Pontiac Tempest GTO. This is where it began: a midsize automobile with a big, high-power V-8 marketed as an integrated high-performance package -- the very definition of the muscle car.

To create the GTO, Pontiac sidestepped GM's prohibition on intermediate-sized cars having engines over 330 cid. In a ploy that didn't require corporate approval, Pontiac made its 389-cid V-8 part of a $296 option package for the new Tempest. The name Gran Turismo Omologato was boldly appropriated from the Ferrari GTO. Roughly translated, it means a production grand touring machine sanctioned for competition.

Pontiac hoped to sell 5,000 '64 GTOs; it sold 32,450. The Goat, as it was affectionately dubbed, generated a cult following and sent rivals scrambling to come up with similar machines.

To create an engine worthy of its original, Pontiac fortified the 389 with a high-lift cam and the 421-cid V-8's high-output heads. The GTO had 325 bhp with the standard Carter four-barrel. About 8,250 of the cars were ordered with the extra-cost Tri-Power setup -- three Rochester two-barrels -- and were rated at 348 bhp. Both versions had 10.75:1 compression and 428 lb-ft of torque. The standard three-speed manual and optional four-speed used Hurst linkages; a two-speed automatic also was optional.

A thick front sway bar, heavy-duty shocks, stiffened springs, and high-speed 14-inch tires were included. A $75 "roadability group" added sintered metallic brake linings and a limited-slip diff. The sporting attitude carried over inside, where all GTOs got bucket seats and an engine-turned aluminum instrument surround.

Four-barrel Goats typically ran 0-60 mph in about 7.5 seconds and the quarter in 15.7 at 92 mph. Tri-Power GTOs were consistently quicker and added immeasurably to the car's mystique.