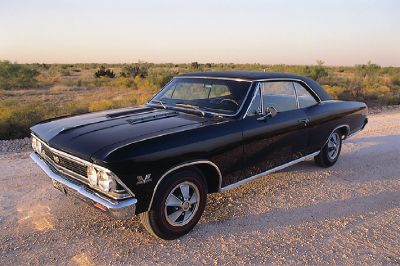 Chevy repositioned its Super Sport Chevelle as an all-out performance muscle car for '66, but in some ways, more turned out to be less in the Chevelle SS 396.

Like other GM intermediates, it was reskinned, though dimensions hardly changed. SS models got a blackout grille and a new hood with nonfunctional vents. With engines of around 400 cid now obligatory in this game, Chevy made the 396-cid V-8 standard, so all its midsize muscle cars were now Chevelle SS 396s.

So was much of the rest of the car, at least compared to the pricey, limited-edition Z-16. Instead of reinforced brakes and underpinnings, the '66 SS 396 used standard Chevelle brakes and suspension pieces. Chevy claimed it had stiffer springs and shocks -- an assertion some testers disputed once they experienced the car's wayward handling and subpar stopping ability. In fairness, comfortable seats, tractable engines, sporty styling, and a $2,776 base price made the '66 SS 396 a great daily driver.

Then, in the spring, Chevy released the L78 396. This was essentially an updated Z-16, but with solid lifters and new exhaust manifolds. It had the 427-cid V-8's large-valve heads, plus 11.0:1 compression, aluminum intake manifold, and an 800-cfm Holley. The L78 echoed the Z-16's 375-bhp rating and was the 396 that hard-core Chevy street warriors had hoped all the '66s would be. Only about 3,100 L78s were built. But even the base Chevelle SS was now a genuine big-block muscle car, and the best was yet to come.