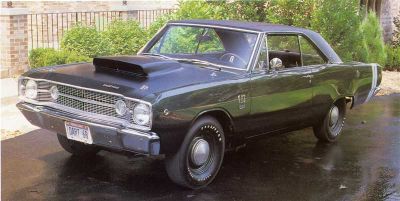 This is one of about 650 '68 and '69 Darts fitted with a 440-cid V-8 under a program in which Chrysler shipped the engines to Hurst-Campbell, Inc. for installation. This was an extreme muscle car. See more muscle car pictures.
©2007 Publications International, Ltd.

The ultimate street-racer's fantasy is to show up in a ratty-looking sleeper and blow the doors off one hoity-toity muscle car after another. A Dodge Dart GTS 440 made that a reality for at least one bold fellow. You could look it up.

©2007 The 440 Darts were street-legal cars, but aftermarket headers, ignition kit, hoses, wiring, air cleaner, and internal hop-ups on this engine are typical of the drag-racing modifactions most of them got.

Of course, that didn't stop some Mopar freaks from stuffing in a 440-cid V-8. In all, about 650 '68 and '69 Darts were fitted with the big-block Magnum, which almost always was modified after the transplant to well beyond its 375-bhp factory rating. Conversion of a group of 48 '68 GTSs was typical.

Dodge shipped 383-spec Darts (minus powertrain) along with factory-prepped 440 engines to Hurst-Campbell, Inc., a Michigan aftermarket company. Hurst-Campbell did the conversion, Dodge reps inspected it, and the cars were forwarded to Grand Spaulding Auto Sales in Chicago, a performance-oriented Dodge dealer. These cars got vehicle identification numbers but were not covered by the factory warranty.

With even more weight in front and no power steering (it wouldn't fit), 440 Darts were good for little but all-out straight-line attacks. So irresistible was the setup that a thief stole Car and Driver's brand-new, bright blue 440 Dart test car from its New York parking space.

Documenting the heist in its October 1969 issue, the magazine said the Dart soon surfaced "at a local street racing highway and cleaned up. The car, camouflaged in light gray primer...had put down a brace of Corvettes that had gained some local renown."

The thief was eventually caught red-handed at New York National Speedway, where the Dart was embarrassing all rivals. Appropriately enough, it was running in the dragway's "Hot Car" class.