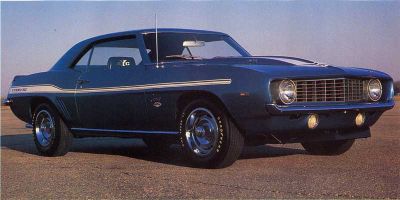 The 1969 Yenko Chevrolet Camaro 427 was the delicious conversion of muscle car need and a factory's desire to please.

To Ford fans, Carroll Shelby is the high-priest of performance. Chevy loyalists revere a Canonsburg, Pennsylvania, car dealer named Don Yenko. Yenko had a deserved reputation for driving, building, and selling dominating Chevrolets, starting in '65 with well-crafted super Corvairs. He advanced to installing 427-cid Corvette V-8s in '67 and '68 Camaros, performing 118 of the transplants. These $4,200 ponys ran in the low 13s right off his shop floor.

Other Chevy retailers, notably Nickey in Chicago, Dana in California, and Baldwin-Motion in New York, undertook similar transplants. But Yenko Sports Cars Inc. had dealer outlets for its cars in 19 states, and that earned clout with Chevrolet. Dealer conversions were complicated, however, and came with only a limited engine warranty.

So at Yenko's urging, Chevy agreed to factory-build a batch of 1969 Camaros with 427 engines, and to provide full 5-year/50,000-mile warranties. This was done under the Central Office Production Order system, which had previously been used to satisfy special requests from non-performance fleet buyers.

How many COPO Camaros were built isn't known; Yenko ordered 201, but other dealers could order them as well, and 500 or more were produced. All were basically the same: They had the iron-block and head, solid-lifter L72 427, which Chevy pegged at 425 bhp but which Yenko rated a more-realistic 450; Hurst four-speed manual or dual-gate automatic; heavy-duty 4.10:1 Posi; cowl-induction hood; heavy-duty Z28 suspension with F70xl4 tires; and other go-fast goodies. The package added about $800 to a base coupe, including $490 for the engine.

©2007 Publications International, Ltd. Chevy delivered the Camaros with no special markings, but Yenko added striping and "Yenko Super Car" insignia to the ones he sold.

Chevy delivered the standard COPO Camaros with dog-dish hubcaps and no exterior badging; not even the engine was identified as a 427. Yenko ordered his with 15-inch rally wheels, bigger front roll bar, and 140 mph-speedometer, then dressed them with "sYc" (Yenko Super Car) insignia and striping, and made available mags, gauges, headers, and other items that could push the price past $4,600. As delivered, Yenko Camaros turned effortless mid-13s. Most were fitted with headers and slicks, even for street work, and in this form recorded 11.94-secomd ETs at 114 mph.