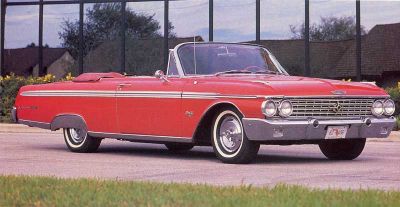 ©2007 Publications International, Ltd. The Galaxie was the only model to get the engine that Ford enlarged to produce more than 400 horsepower. See more Ford Galaxie pictures.

The 1962 Ford Galaxie 406 brought newfound power to the company's muscle cars. Ford began 1962 without an engine over 400 cid, a serious deficiency against 409 Chevys, 413 Mopars, and 421 Pontiacs. The remedy came partway into the season with an enlargement of the 390-cid Ford to 406 cubic inches.

Called the Thunderbird 406 High-Performance-V-8, but available only in the Galaxie, the new engine cost $380 and came with a heavy-duty suspension, fade-resistant drum brakes, high-capacity radiator, and 15-inch wheels instead of 14s.

Breathing through a single Holley four-barrel, the 406 had 385 bhp at 5800 rpm and 440 lb-ft of torque at 3800. As the Super High-Performance Tri-Power, it put three Holley two-barrels under a lovely oval air cleaner and was rated at 405 bhp.

Both versions had 11.4:1 compression and cast-in headers that led to low-restriction dual exhausts. Ford's Borg-Warner four-speed manual was mandatory and axle ratios as high as 4:11.1

©2007 Publications International, Ltd. Although most 406s were hardtops, Ford offered a convertible option in the 500XL Sunliner version.

Most 406s went into Galaxie 500 hardtops and pillared coupes, but some were ordered in another midyear addition, the full-zoot 500XL hardtop coupe and 500XL Sunliner convertible.

A base 406 would scoot to 60 mph in 7.1 seconds; the tri-power was about a half-second quicker to 60. Quarter-mile times in the mid-15s were the rule with either version.

©2007 Publications International, Ltd. Despite the high horsepower, the Galaxie 406 was a bit too heavy to beat its rivals on the track.

In sanctioned drag racing, the 406 Fords were still too heavy to outrun the top guns from Dodge, Plymouth, Chevy, and Pontiac. Ford shaved 164 pounds off the competition versions by offering

aluminum bumpers and fiberglass body panels, but to no avail.

On the street, however, a rival who didn't notice the gold "406" emblem on the front fender could easily get caught napping by one of these newly fortified Galaxies. Motor Trend said the engine provided "something like Ferrari performance at a fifth of the price." The 406 was also made available in full-size Mercury models for late '62.