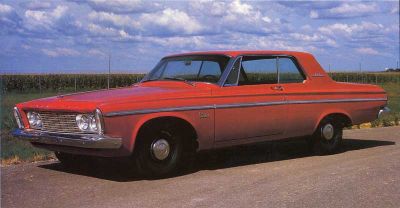 Plymouth muscle cars spanned the spectrum from fanciful to fearsome -- and sometimes displayed both qualities in a single model.

Long Chrysler's low-priced, low-excitement brand, Plymouth in the 1960s and early '70s was transformed into a destination for big engines and big thrills. Along the way, it managed to carve out a muscle car identity distinct from that of its Dodge sister division.

Plymouth was competitive from the dawn of the horsepower race. Its downsized 1962 models, like the 1962 Plymouth 413 Wedge, were a flop with mainstream buyers, but their sensible dimensions and light weight were a perfect performance home for Mopar's potent 410-bhp 413-cid V-8.

Capable of mid-14-second quarter miles at over 100 mph, these were among early muscle's quickest cars. Their reputation grew for '63, when enthusiasts could equip them with a competition-ready 425-bhp 426-cid Wedge Head V-8.

Plymouth fans glimpsed a bright future in 1964 when Chrysler unleashed its 426-cid Hemi V-8 on NASCAR and organized drag racing. A Hemi won the '64 Daytona 500 and would power drive Richard Petty and his famous blue No. 43 Plymouths to racing immortality. A Hemi suitable for street use followed for 1965, and Plymouth made the 425-bhp monster available in its midsize Satellite and Belvedere models.

Plymouth had the hot engines and a winning way on road and track, and in 1967 brought out its first integrated muscle-image package in GTX. This Satellite-based supercar came with a 375-bhp 440-cid V-8 and offered the Hemi as its only engine option. It was the first midsize Plymouth to sport the hood scoops, special emblems, bucket seats, redline tires, and wide wheels that had come to symbolize muscle's heyday.

As with other manufacturers, midsize models played a vital role in Plymouth performance, and its 1968-70 intermediate cars, with their handsome, rounded sheetmetal and generous engine bays, became muscle classics. This is the series that hosted one of the most-influential cars of the period, the Road Runner.

Combining low price, high performance, and a whimsical attitude (cartoon-bird stickers, "beep beep" horn) Road Runner was a sales hit that others -- Dodge included -- were forced to imitate. The '70 Road Runner played host to one of the wildest rides ever to come out of Detroit. With its giant rear wing and elongated nosecone, the Road Runner Superbird (along with the similar Dodge Charger-based Daytona) put NASCAR superspeedway styling on Main Street America.

Plymouth was also strong in other market segments. Its compact Valiant-based Barracuda beat Ford's Mustang to market by 17 days in 1964, giving the division an early toehold in the pony car field. These first Barracudas were good junior performers. The '65 Barracuda version balanced reasonable handling with a 235-bhp 273-cid solid-lifter V-8. Barracuda began to flex is muscle for '67, when 383-cid big-block was added to the options list. The '69 'Cuda version could be had with the 440-cid V-8.

Barracuda was redesigned for 1970, sharing with the new Dodge Challenger quintessential pony car proportions and giving rise to some of the most prized rides of the muscle era. These cars were capable of hosting every high-performance mill in the Chrysler catalog, from the high-revving 340-cid V-8, through the 440 big block, to King Kong Hemi itself.

Built in low volume, the '70 and '71 Hemi 'Cudas were vicious when new and are among the highest-valued muscle collector cars today. The striped and spoilered '70 AAR 'Cuda also enjoys collector interest.

Plymouth launched its encompassing Rapid Transit System muscle armada for 1970. It included the 'Cuda, Road Runner, GTX, and the new compact Duster 340. The '71 GTX was one of the last big-block cars of the muscle age, and while the Road Runner name fluttered on until 1978, it was performance in image only.

Fitted with the 340 and later 360-cid V-8s, the 'Cuda survived until 1974 and the Duster until 1975, marking the last of the performance Plymouths. They were but a pleasant memory to most by the time the division itself was put to rest in 2001.

For photos, profiles, and specifications of the best Plymouth muscle cars, check out: