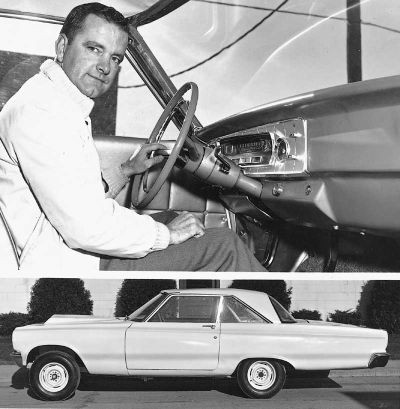 The 1965 Dodge Factory Altered Wheelbase Coronet and its Plymouth counterparts were the ultimate production-based muscle cars and were in effect missing links between the Super Stock factory lightweights of the early '60s and the all-out Funny Cars that were just over the horizon.

With proper exhaust systems, these renegade cousins of showroom models would have been street-legal. Clearly, though, they were intended for competition, and their target was the premier showcase for the hottest manufacturer equipment: the NHRA's Factory Experimental class.

FX was a zone beyond Super Stock. Super Stockers were basically models sold to the public. FX cars need only use factory optional equipment -- they need not be showroom available.

Hemi engines and lightweight body parts already were optional in midsize Mopars. The next frontier was weight transfer to optimize traction off the line. Chrysler's solution was to design six Dodge Coronets and six Plymouth Belvederes that put maximum weight on the back axles. The front and rear wheels were moved far forward of their stock position, and the wheelbase itself was shortened by 5.5 percent.

©2007 Publications International, Ltd. Altered Wheelbase Dodges were virtually identical to the Plymouth version pictured here. In both, axles were relocated to put about 56 percent of the car's weight over the rear tires. See more muscle car pictures.

Viewing the first of these cars prior to the '65 season, NHRA inspectors recoiled. Chrysler had gone too far. A wheelbase-alteration limit of two percent was quickly instituted, effectively banning the new Mopars from NHRA FX competition. It didn't much matter. The Dodge and Plymouth factory drag teams did an end run around the NHRA. The cars became a sensation running as AHRA Factory Experimentals and in lucrative exhibition matches nationwide. Capacity crowds turned out to see such popular drivers as Dick Landy, Roger Lindamood, Dave Strickler, and Bud Faubel at the wheel.