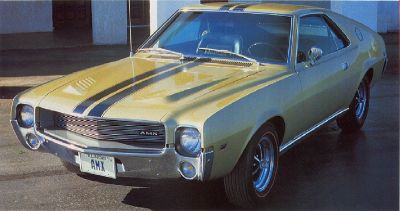 The very existence of AMC muscle cars such as the AMX, Hurst SC/Rambler, and Rebel "Machine" was evidence of how thoroughly muscle car fever swept the nation in the 1960s and early '70s. Even American Motors, the champion of the economy car, had caught the bug.

Throughout the late 1950s and early '60s, AMC was the home of the popular, compact Rambler, and the company prospered in a growing market for economy cars. But how did AMC go from being the leading American manufacturer of low-priced fuel sippers to challenging shoppers to "Test drag a Javelin," as it did in a 1968 advertisement?

AMC's flirtation with the muscle car market was a side effect of its mid-'60s product diversification. After AMC President George Romney left in 1962, his successors altered company strategy to fight the Big Three in as many market segments as possible. While that strategy was ultimately not beneficial to AMC's long-term health, it did put some exciting cars in dealer showrooms.

AMC may have been late to the staging lanes, but it produced an impressive array of performance cars in a relatively short time. The first stirrings of AMC performance came in 1965, when the dramatic if ungainly Rambler Marlin fastback was introduced to battle the Ford Mustang and Plymouth Barracuda.

From a sales and performance standpoint, the Marlin was a flop. But AMC did gain some muscle car credibility for 1967 when it dropped its new 280-horsepower, 343-cid Typhoon V-8 into both the Marlin and the more pedestrian Rebel. In 1968, AMC finally emerged as a legitimate muscle car contender.

That year the company introduced two new performance offerings: the Javelin and a truncated variant called the AMX. The Javelin was a much better attempt at cracking the pony car market than the Marlin, and the two-seat AMX was a new sort of animal altogether.

However, the Javelin and AMX were not the only AMC performance offerings. In 1969, AMC worked with shifter manufacturer and specialty-car builder Hurst to produce the 390-powered SC/Rambler. It followed that up in 1970 with the Rebel Machine, which packed a 340-bhp 390. When the Rebel was retired, the 1971 Hornet SC/360 took its place as AMC's low-buck muscle car.

AMC's biggest-displacement performance engine arrived for 1971: a 401-cid V-8 rated at 330 bhp. The 401 was the top option for that year's new, larger Javelin, as well as the AMX, which ceased to be a separate model and became part of the Javelin lineup. Real AMC performance faded as the 1970s progressed, but the Javelin/AMX soldiered on with a low-compression, 255-bhp 401 for a few years. When the Javelin ended production after 1974, AMC's performance personality died along with it.

For profiles, photos, and specifications of the best AMC muscle cars, see: