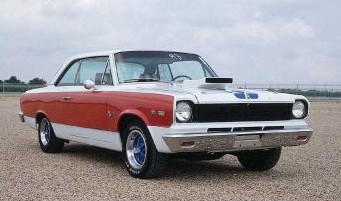 Laugh if you will, but the 1969 AMC Hurst SC/Rambler could blow the doors off some pedigreed muscle cars. Too bad AMC had to compensate for its slim advertising budget by making a billboard of the car.

Having dipped into performance with the '68 AMX and Javelin pony cars, Detroit's No. 4 automaker decided to expand into the budget-muscle arena with -- don't snicker -- a Rambler Rogue compact. Directed by Hurst Performance Research Inc., the project followed the simplest hot-rod canon: stuff in the biggest available V-8. In AMC's case, that was the AMX's 315-hp 390-cid four-barrel. A Borg-Warner four-speed with a Hurst shifter and a 3.54:1 limited-slip completed the drivetrain.

Heavy-duty shocks, anti-sway bar, and anti-hop rear links fortified the suspension. E70Xl4 Polyglas tires and the AMC's optional heavy-duty brakes with front discs were included. Inside were reclining buckets. Instrumentation was standard Rogue with the exception of a Sun 8000-rpm tach strapped to the steering column.

The car debuted midway through the model year as the AMC SC/Rambler-Hurst; most called it the Scrambler. Only 1,512 were built, and they were potent little screamers. But that exterior treatment! No one seemed to like it. A "tri-colored nickelodeon," said Car and Driver.

©2007 Publications International, Ltd. The Scrambler was a sort of supercar caricature, with an exaggerated hood scoop and lampoonish paint and graphics.

All SC/Ramblers started as appliance-white hardtops with two-tone mags, racing mirrors, blackout grille and tail panel, Hurst badging, and a real ram-air hood scoop with an upthrust snout that unfortunately recalled the nose of a hound sniffing for the scent. About 1,200 Scramblers went full "Yankee Doodle," with broad red bodysides, wild hood graphics, and a fat blue dorsal stripe. The rest made do with only simple rocker-panel striping.

With ETs in the low to mid-l4s, however, some unwary rivals wouldn't have to look at the whole car. "This sort of acceleration," said Road Test, "is going to show the Hurst emblem on the back to a few GTOs, Cobra Jets, Road Runners, and Mach 1s."