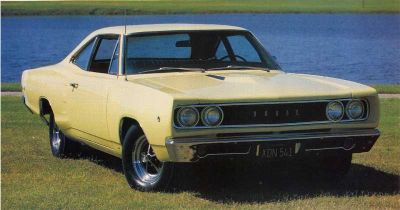 GM divisions had practiced it for years, but it took the competitive fervor of the muscle car years to spark a sibling rivalry between Dodge and Plymouth. The 1968 Dodge Super Bee carried the colors for Mopar's Scat Pack division.Plymouth had struck first, with the fall-1967 introduction of the budget-muscle 1968 Road Runner. Dodge -- already irked that it had coined the "road runner" name in a '67 Coronet R/T advertisement -- scrambled to respond. Its answer was a bang-for-the-buck stripper based on the redesigned Coronet pillared coupe. The inspiration -- and the drivetrain -- were pure Road Runner. For the name, however, Dodge looked to its Scat Pack symbol and released its new model in the spring of '68 as the Super Bee.

The $3,027 base price was $131 over that of the Road Runner, which used the same basic chassis. Curb weight was nearly identical, so performance was a wash. Base engine for both was the 335-bhp four-barrel 383-cid V-8 that borrowed cylinder heads, camshaft, and induction system from the 440 Magnum V-8.

The 426 Hemi was the only engine option, but at nearly $1,000, it clashed with the Super Bee's budget appeal and only 125 were ordered. A Hurst-shifted four-speed manual was standard, with the three-speed TorqueFlite automatic optional.

©2007 The Super Bee was a "stripper" pillared coupe and included its its low base price a 335-bhp 383-cid four-barrel, four-speed with Hurst Competition-Plus shifter, and heavy-duty suspension.

Holding the price meant minimizing amenities, and while Super Bee borrowed the Charger's Rallye gauge layout to edge the Road Runner in instrumentation, a tachometer still cost $38 extra. Heavy-duty suspension and brakes and red-line wide-oval tires were standard, though.

©2007 The Super Bee's instrumentation was lifted from the Dodge Charger.

©2007 With its tongue-in-cheek graphics, the Super Bee was a member in good standing of Dodge's performance-oriented Scat Pack, which the automaker promoted as the "Cars with bumblebee stripes."

Dodge was proud enough to name names in Super Bee advertising: "It's the super car for the guy who doesn't want to shy away from GTOs...only their high prices." But finishing far behind the Road Runner in sales surely must have stung.